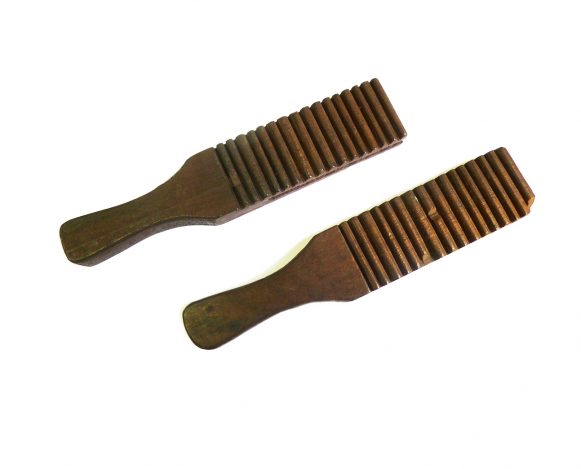 Instrument made of wood and composed by two elements. Each one of them has a flat shape with a broader upper part and is formed by two pieces of wood disposed in parallel (there is a space between them). This upper part also has transversal grooves disposed next to each other. The sounds produced by the instrument are of undetermined pitch. In order to play, the musician rubs a wood element against the other.

Generic term for the scraped idiophone. It refers to any type of material which surface – or part of it – has a series of transversal and parallel grooves very close one to the other, following the length of the piece, to be frictioned with a sort of stick. There are evidences of this instrument since the Stone Age. It can be made of one or more bamboo sections (taboca or taquara), wood, metal, bovine horns or calabash (like its Cuban similar, the guiro). In the Museum Delgado de Carvalho, there are two specimens of reco-reco: one, more common made of bamboo, and the other made of wood, a twin piece, being the pieces made to friction one against the other.
Text written by Professor Pedro Sá, percussion professor at the Federal University of Rio de Janeiro (UFRJ).