Pan fluteAuthor not identified | MIDC
Audio & Video Records
The instruments featured in these videos / audios are not museum items, but similar ones. The visual resources used in the materials are not for profit. The visual resource is used as a way to illustrate the use of a musical instrument with an educational purpose.
Video 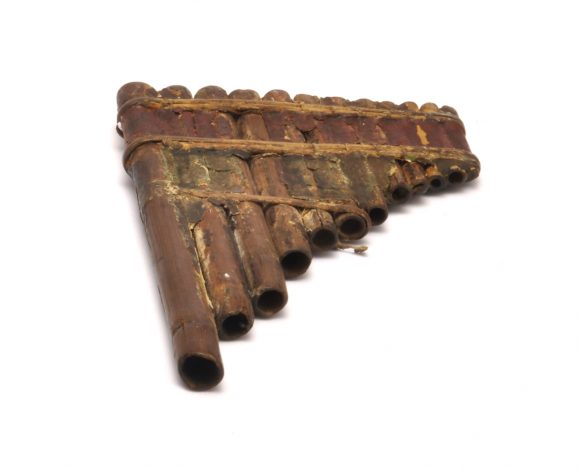 Instrument made of cane, with twelve tubes with different lengths. These tubes are united by three fine strings made of vegetal fiber, organized in a decreasing manner, that is, from the longer to the shorter. The instrument’s lower ends are closed. In order to play, the musician blows the upper opened ends. Each tube generates a note, when the blow is stronger an additional superior harmonic is generated. To play the semitones, the musician slightly turns the flute outwards. The Delgado de Carvalho Collection catalogue, made in 1905, mentions that the tubes were covered by a paste, and they have later been painted in blue, green, red and gold. At present, this paste and paintings no longer exist, and only a few traces of this previous configuration remain.

In Europe, the oldest Pan flutes were found in Italy and go back to the 5th and 6th centuries BC. They were common amongst the Greeks and the Etruscan, who regarded them as a pastoral instrument of low value. Nowadays, the Pan flutes are important instruments in the folk music of Romania, Myanmar, Oceania (especially the Solomon Islands) and of the Andean countries of South America. In the South American countries, the Pan flutes’ tubes length may reach one meter or more and can be organized in two or three rows, being each played by a pair of musicians.