GhaytaNot identified | MIDC
Audio & Video Records
The instruments featured in these videos / audios are not museum items, but similar ones. The visual resources used in the materials are not for profit. The visual resource is used as a way to illustrate the use of a musical instrument with an educational purpose.
Video 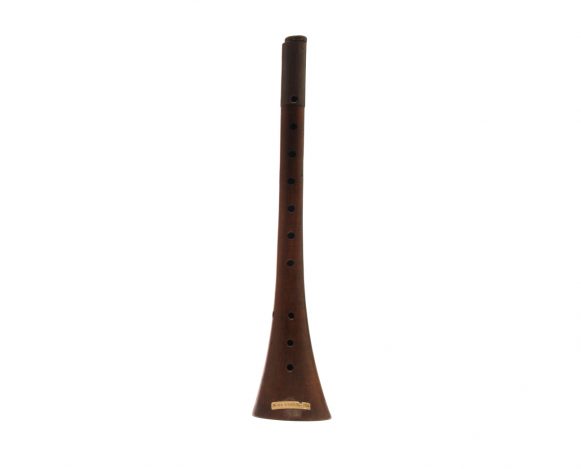 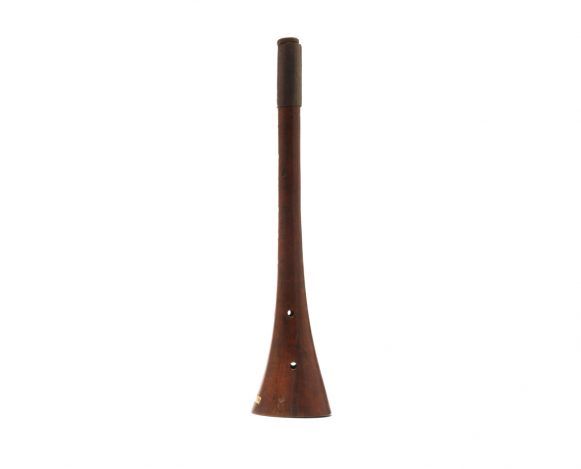 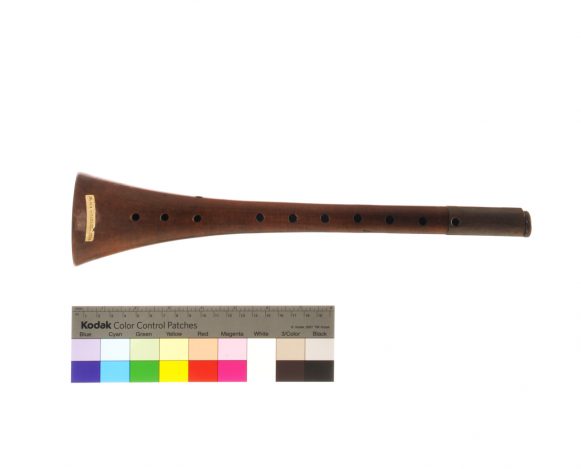 Double reed instrument made of wood. The body is formed by a single conic shaped piece of wood.The final opening is called ka’ba. The reed fits into a brass segment, articulated with the instrument’s body. It has ten holes along the front part, one hole on the back, two on the right side, summing up a total of fifteen holes. The reed is made of two blades of cane measuring around 2 cm long. The sounds produced by the instrument are the following: B- C#3 – D#3 – E3 – F#3 – G3 – G#3 – A3 – A#3. In order to play, the musician presses the reeds with the lips and against the pirouette (or rosette), which is a small disk, made of wood, ivory, mother of pearl, or other material that can fit between the reed and the brass tube. The musician presses the lips against the disk, blowing through the reed and using the cheeks as air storage space, in such a way that the instrument can be continuously blown, using the circulatory breathing technique.

The term ghayta can be used to name a type of oboe, like the museum’s item, or bagpipes. The term originates from the Gothic word ghaid (meaning bundle) and in fact it was initially used to name a skin made bag pipe. However, probably due to the fact that both the bagpipes and the oboe have what it is considered to be similar timbers and social functions, the term has also started to be applied in some regions to refer to a type of oboe. Morocco, the country where the museum’s item comes from, is one of this regions. The ghayta is a type of oboe, a melodic instrument, generally played by male professional musicians, who come from a lineage of ghayta players. Although, there were reed aerophones in Mesopotamia before the Islamic expansion. The use of the ghayta was established in the region after the growth of Islamism (7th century), and because of that the instrument’s diffusion is intimately connected to the expansion of the Islamic culture – for instance, the bell of the ghayta is called ka’ba, which is the name of the most sacred place for Muslim cult in the Mecca. The instrument was probably a product of the synthesis of other instruments coming from Iran, Mesopotamia, Syria and Anatolia. It was introduced in military bands and later it had its use spread over newly conquered areas by Islam. During the Ottoman Empire, the instrument named zurna, has spread even more, this time towards Europe. The instrument’s timber is shiny and powerful and its uses were varied: in ceremonial and military bands, in funeral music (in Armenia it is still used for this purpose), to escort notable believers to the Friday prayers (sacred day for Islamism); to mark the beginning of a pilgrimage; to exercise the sentinel function; in annual celebrations of floods of the Nile; and in types of shadow theatre with puppets. At present, the instrument is used in outdoor parties with music, normally composing small ensembles (generally two oboes and one or more drums), or in oboe and drum duos. These oboe and drums ensembles are also common in weddings, circumcision parties, dances, games, competitions, Independence Day national celebrations, festivals, manifestations and parades.