Rosimary Parra introduces us to Vihuela and the Baroque Guitar

There is a wide variety of plucked string instruments prior to our well-known guitar. Among these we find the vihuela, the predominant instrument in sixteenth-century Iberian music.

The vihuela was used mainly in Spain in the 15th and 16th centuries and was also known as viola in Italy and Portugal. Originally the word “viola” was applied to several stringed instruments according to the form of execution: vihuela de arco (played with a bow), vihuela de pendola (played with a feather, which served as a kind of plectrum or plectrum) and vihuela de mano (played with fingers). However, during the 16th century, the name “vihuela” usually referred to vihuela de mano.

The vihuela has similarities with the lute in terms of the use of pairs of strings (orders), moving frets and tuning, however it is distinguished by its resonance box in the shape of eight, characteristic of the guitar family. The vihuela replaced the lute in the Iberian Peninsula and became as important in the musical environment of the courts as the lute in other parts of Europe. 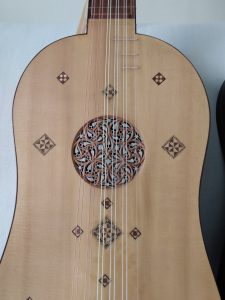 The first guitars of the 15th century were played more simply using “rasgueado”[1] chords to accompany songs and balls, while the vihuela was used in courts and palaces to play more elaborate music.

However, from the 16th century onwards, when the 5-order guitar began to impose itself on Spanish musical life, its use also extended to the aristocracy. Gradually, the Spanish “rasgueado” fashion would spread to other European circles and, from the 17th century onwards, the 5-order guitar would have great success in France, Italy, and England. The 5-order instrument will be known in Europe as the Spanish guitar, and more specifically in Italy as “a la spagnola”.

The 5-order Spanish guitar model, which was established at the end of the 16th century, has the following characteristics: the dimensions are slightly larger than the 4-order Renaissance guitar, the instrument’s body with a slightly pronounced waist, use of movable frets, pegs, ornate rosette and tuning A, D, G, B and E, being 4 orders in pairs and 1 single string.

The historical reference for demarcating the moment when the 5-order guitar became known as the Spanish guitar is the publication by Joan Carles Amat (1572-1642) with the title Guitarra española de 5 órdenes (1596). This was the first treatise on this instrument and mainly has instructions on “rasgueado” style accompaniment.

At the beginning of the 17th century, the Spanish guitar became a very present instrument in musical circles throughout Europe. Such diffusion contributed to the development of the instrument technique. Among other elements, the mixture of “rasgueados” and “punteados” favored the emergence of works with greater musical complexity. In this context, the work of Gaspar Sanz (1640-1710) Instrucción de Música sobre Guitar Española (1674) and other publications such as those by Francisco Guerau and Santiago de Murcia stand out.

In France the Baroque guitar reached its zenith during the reign of Louis XIV. In his court, important guitarists were in service, highlighting the figure of Robert de Visée (c.1660-1720).

The last baroque guitar music publications date back to the early 18th century. Gradually the instrument will leave the scene due to the new demands of the musical environment in vogue.

[1] The Spanish word rasgueado is onomatopoeic and descriptive. Rasgueados are an elaborate way of strumming the strings, using up and down strokes with the fingers and thumb. Ver em: RASGUEADOS on the classical guitar level 4. Available at: <https://d2vvqscadf4c1f.cloudfront.net/d82DAOnnR6G9gTSxShNQ_26%20RASGUEADOS%20Level%204.pdf>. Accessed in: Feb. 12th, 2022. 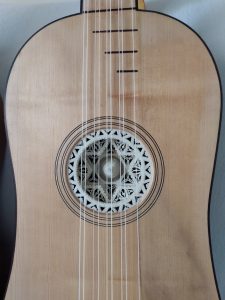 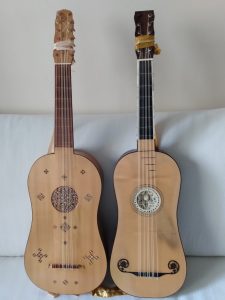 Vihuela de Mano, on the left, and Baroque Guitar, on the right. 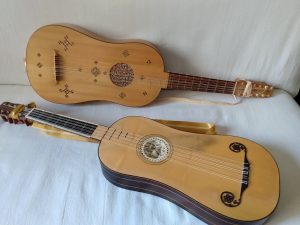 Vihuela de Mano, above, and Baroque Guitar, below.

GLISE, Anthony LeRoy. The Guitar in History and Performance Practice from 1400 to the 21st Century. A University Textbook for the Historical Study of the Guitar. USA 2016