Organ of the Anglican Parish of the city of Santos - SP, Brazil

Listen to the sound of the instrument as you read (Video shows an “Apollo Organ” with electric bellows drive mechanism, probably from the 1930s):

In 1918, a pneumatic harmonium with pedals (reed organ) by Rushworth & Dreaper in Liverpool, made its way to Brazil, more specifically to the coast of São Paulo. That year, the first – and only – Anglican Episcopal Church in the city of Santos had just been built and, as usual and important, the instrument of the organ family was commissioned to be part of their cults.

Unlike an organ in which metal tubes are responsible for the emission and pitch of notes through the passage of air through them – tube organs – the harmonium does so with small vibrating reeds – also made of metal. For this, much like an accordion, there is a bellows expanded and contracted by a pedal mechanism responsible for controlling the air in the instrument (fig. 1)¹. 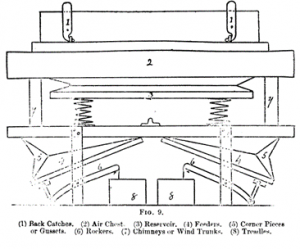 Figure 1: Pneumatic diagram of a harmonium.

In the image above, the part number two is the air bag (bellows) moved by the pedal system below. The keys, when pressed, release the passage so that the air reaches the reeds, causing their vibration.

In this video (2018)², it is possible to better understand how this system works:

The harmonium model commissioned by the Anglican Parish of Santos is “Apollo Organ”, as can be seen on the plate above the keyboards shown in figure 2.

“The Apollo is a pedalboard organ with two keyboards […] made to look like a pipe organ console. In it there are usually four sets of picks for each keyboard and two or three for the pedals” (p. 7).

Respectively “Gt.”, “Sw.” And “Ped.” are abbreviations for “great”, “swell” and “pedal”. The first refers to a set of registers linked to the lower keyboard, the second to the upper ones, and the third to the pedals. In addition, there are those that work as combinations between the sets, the “couplers”. These registers are pegs that are on the sides of the instrument (fig. 3) pulled to obtain different timbres (MILLER, 2003) 5. 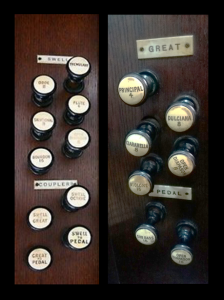 There are 2 registers for the pedals, 5 for the lower keyboard, 4 for the upper and 4 for the combinations.

The numbers represent the changes in octaves in the register shift:

In 1985, KERR writes that the harmonium would be in regular condition. However, currently, according to Reverend Josué, responsible for the parish and who received me on January 19, 2022, two keys do not work and need to be repaired. 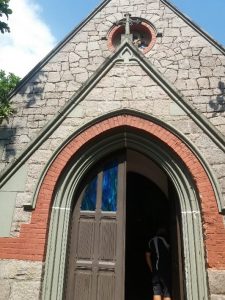 Figure 5: Entrance to the Anglican Episcopal Church of the city of Santos, built in 1918.

*Daniel dos Santos is a multi-instrumentalist musician with a focus on cordophone musical instruments; Bachelor’s Degree in Music and Musical Sciences from the Federal University of Pelotas (UFPel); and an independent ethnomusicologist with research interests focused on the sociocultural contexts in which traditional Caiçara music is developed (farmer-fisherman from the south-southeast coast of Brazil).