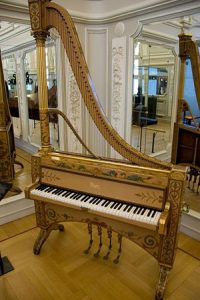 It is a piano-harp, an instrument in the shape of a harp having strings activated by a keyboard. This instrument was invented in the XVIIth century in Spain by Juan Hidalgo, but only gained prominence and greater use during the XIXth century, when Johann Christian Dietz started manufacturing and presenting his piano-harps. The piano-harp shown in this picture was produced by Dietz during the XIXth century and it is a sample belonging to the Belgian Museum of Musical Instruments, located in Brussels.

Another hybrid that is quite interesting is the harp-guitar, a guitar that has extra strings which float in the air, that is, they are not stretched on an arm or any other surface. The instrument may have from one to twelve extra strings and there are many different ways to hold the strings. Alongside we  can see a picture of a harp-guitar, perhaps more of a harp than a guitar, below another one, this time more of a guitar than a harp.

We have a hybrid in the MVIM collection also, it is a banduvitarra [link] that we see in the picture below. The instrument is a mixture of the guitar and the cittern families, it was made in Brazil in 1912. 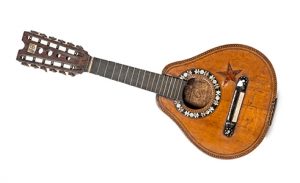 There are “Siamese” instruments as well, there is, the ones that come into being when two equal instruments are combined. Below there is a picture of a double harp, instrument made from two harps and another sample found at the MVIM, the double guitar [link] 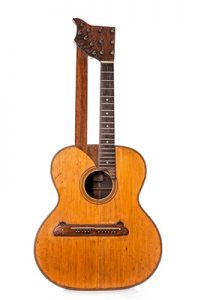 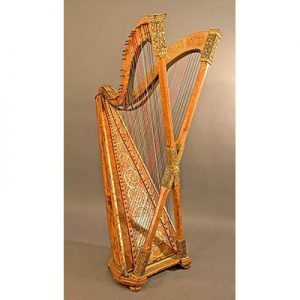