Brief history of the lute

The European lute was derived from the Arabic instrument known as “al Ud”, which literally means “the wood”. The reasons for this name refer to the fact that the instrument had a wooden top, differing, therefore, from instruments built with stretched skin or also because it was built with wooden strips. 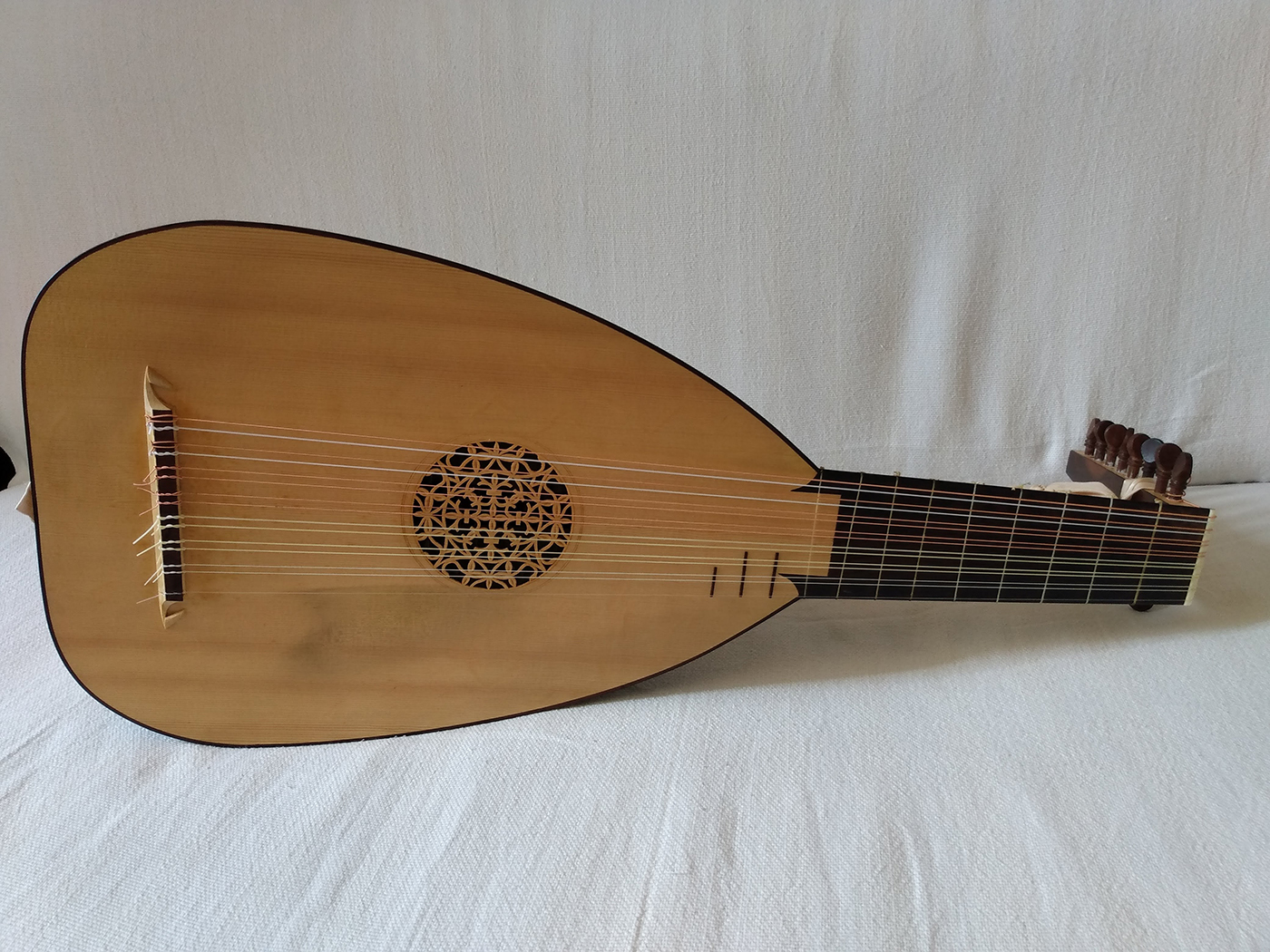 Pear-shaped lute with a rosette on the flat top. (Photo: Rosimary Parra).

The Arabic lute was introduced to Europe by the Moors during the conquest and occupation of the Iberian Peninsula (711-1492). With the Crusades, the instrument spread throughout Europe and gradually presented new characteristics in its construction, also receiving different names in each part of Europe: laud in Spain, alaúde in Portugal, lute in England, luth in France, laute in Germany and liuto in Italy, from the latter also derives the term liutaio which means lute builder.

The main features of the instrument are: domed body, made of a number of separate slats placed together; flat top or sounding board containing one or more ornamental rosettes; arm joined to the scale with movable frets; pegboard placed approximately at a right angle at which the pegs are placed laterally and using nylon strings or gut. 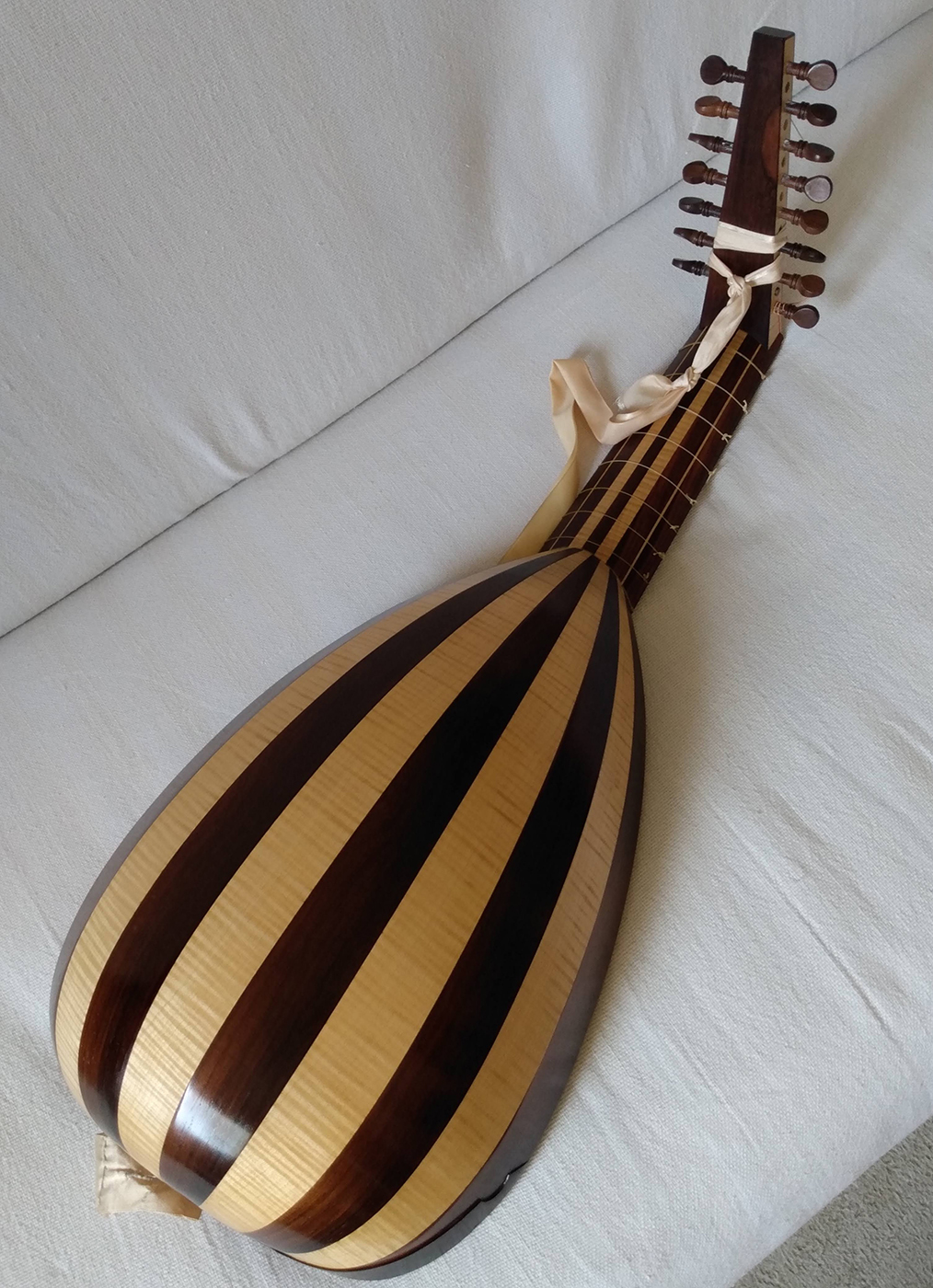 The back of the sounding board is built with wooden slats. (Photo: Rosimary Parra).

The lute family has strings arranged in pairs (orders), and the bulletin had 4 orders. From the beginning there have been instruments of different sizes which implied different tunings. During the 15th and 16th century other orders (pairs of strings) were included to the instrument; at the end of the Renaissance the lutes can have up to ten orders.

The original lute was played with plectrum, a sort of pick, and initially in Europe the same technique was used. Therefore, the lute was first used as a melodic instrument to play a single melodic line with perhaps some chords in the cadenzas and other important points, enabling ornamental elaborations. During the second half of the 15th century, coinciding with the advent of polyphony, the instrument began to be played with the fingertips, which made it possible to play chords as well as polyphonic pieces. In the 16th century it became the most popular instrument in all of Europe and was considered ideal for singing accompaniment. From the 17th century onwards, with the demand for the bass continuum, the lute family expanded and emerged the arciliuto / archliute, the liuto attiorbato / theorbe lute, the tiorba / theorbe and the chitarrone.

Songs contained in the video:

Musician member of the group Música Antiga from UFF – Universidade Federal Fluminense (RJ) in the specialty of plucked strings.

Classical guitar teacher at the Arts Foundation of São Caetano do Sul (SP).

In acting for over 25 years, she has regularly participated in musical and cultural programs in Brazil and abroad. He performs as a soloist and chamber musician in various formations on the guitar and with old plucked string instruments.

In her trajectory, she performed concerts in several Brazilian states and in Portugal, Spain and the Czech Republic (Prague) for musical circulation projects. More recently, 2018-2019, she has been teaching masterclasses in Spain for students at the Superior Conservatory of Music of Castilla la Mancha in the city of Albacete and at the Conservatorio Profesional de Musica Manuel Quiroga in the city of Pontevedra (Galicia).

She has carried out several works in recording CDs, the most recent being the album Las Brujas Iberian Renaissance Music (singing and plucked strings) (2020) on the SerTao label.