What are idiophones, membranophones, cordophones, and aerophones?

Man produces music since prehistorical times, first using his own voice and then musical instruments. At that time, everything could be a source of sound: bones, pieces of wood, stones. These materials could be struck – and percussion instruments appeared! – and, later on, men made holes in bones and began to blow in them, and thus the first flutes appeared.

The musical instruments classifying system most used nowadays by museums is the Hornbostel&Sachs, published in 1914 for the first time. The system got its name from its designers: the Austrian ethnomusicologist Erich von Hornbostel and the German musicologist Curt Sachs. The MVIM has also adopted the system and therefore our online catalog divides the instruments according to the Hornbostel&Sachs classification, that is, in idiophones, membranophones, cordophones, and aerophones.

Idiophones are probably better known as percussion instruments, you must have seen them around, like triangles, “reco-recos” (type of güiro), cymbals. Perhaps “carcabas” are less familiar: 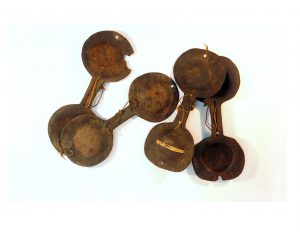 Membranophones are also frequently called percussion instruments, or even drums. They are instruments having their sounds produced through the vibration of a membrane stretched on some sort of bracket. This vibration can be produced by hands or mallets. Examples of membranophones are the bass drum, the “tamborim” drum, the tambourine (surdo, tamborim, pandeiro) – instruments that are markedly part of the sounds of Brazilian music. 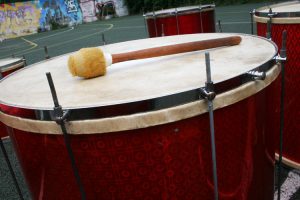 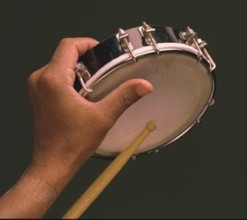 Less familiar are the darabukkas, instruments of the Arab culture, and the dogdog, small drum from Indonesia.

Cordophones or string instruments are those having their sounds produced through vibration of one or more strings. In order to produce the sounds, the strings need to be tightened and, depending on lenght, diameter, and material of the strings, each string will produce a different note. Guitars, violins, cellos, and harps are cordophones. The piano and the harpsichord, even though often identified as keyboard instruments, are cordophones too. 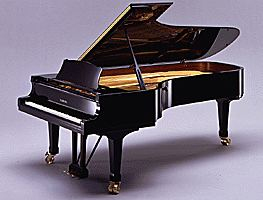 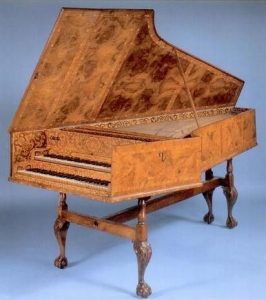 Trumpet and clarinet are examples of aerophones