Transverse fluteClair Godfroy | MIDC
Audio & Video Records
The instruments featured in these videos / audios are not museum items, but similar ones. The visual resources used in the materials are not for profit. The visual resource is used as a way to illustrate the use of a musical instrument with an educational purpose.
Video 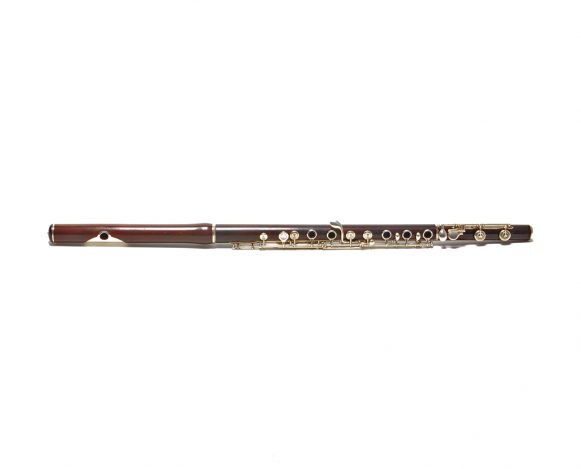 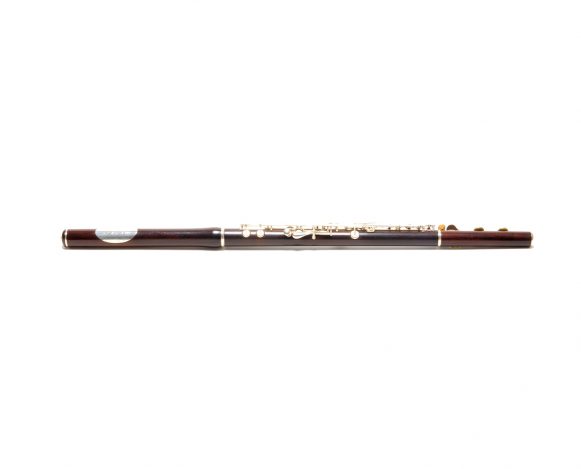 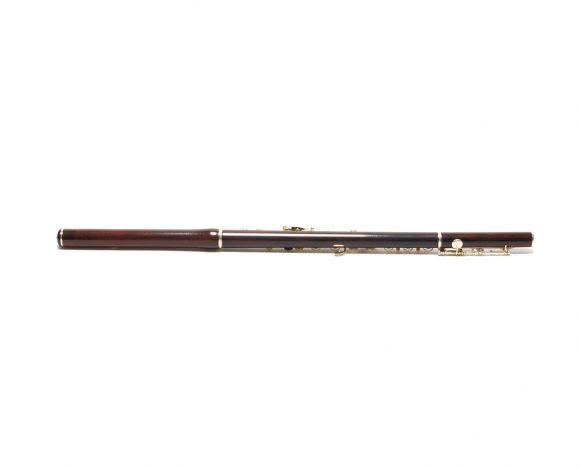 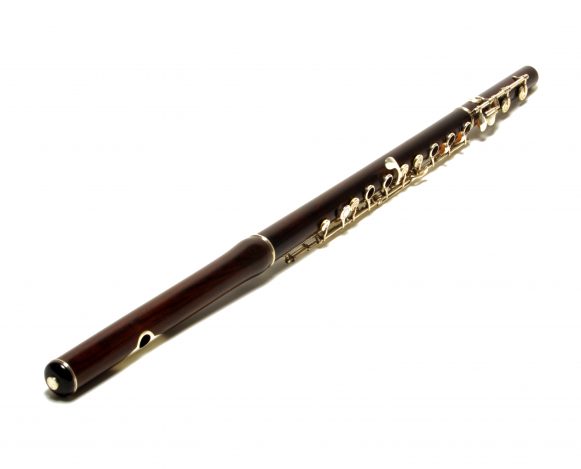 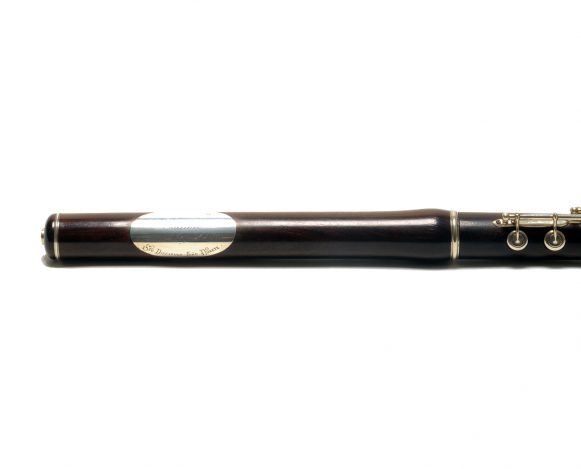 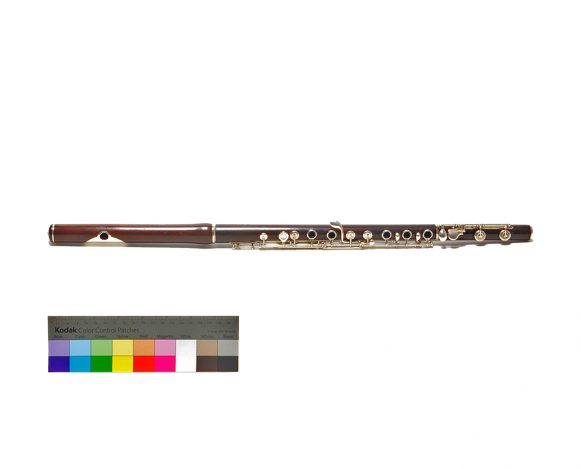 Conic tube flute made of cocus wood, with three parts: head (where the hole blown by the musician is positioned, that is the mouthpiece), the central joint (where the main keys are located) and the foot or lower joint (containing the keys triggered by the right hand’s pinky finger). The instrument’s keys and rings mechanism is made of silver and corresponds to the Boehm system with rings. The mouthpiece is made of silver and it is inlayed on the wood externally involving the head’s hole. It is not a transposing instrument, the transverse flute ranges generally from C3 (B3 in some flutes), covering three octaves or more.

The term flute comprises instruments of different cultures. In general, flutes have holes and may or may not have keys; the tubes are hollow and can be made of bone, wood, metal, galalith, plastic, brass or other materials. The instrument’s sound is produced by the blow of the musician into a bevel – in the case of the recorder and other similar instruments – or laterally onto the edge of the hole–like the transverse flute. This current agitates the air column present inside the tube producing sounds. Each note corresponds to a determinate length of air column, controlled by the closing or not of the holes. The oldest flute ever discovered was found in Germany and is made of swan’s bone; The instrument is from the Paleolithic period and is about 36.000 years old. The flutes closer to those used in present orchestras date of the 10th and 11th centuries. On the 16th century, the flutes appeared in pictorial and literary sources all over Western Europe, which shows the instrument’s great popularity during the period. Up until the 17th century, the flutes used to have only holes, which hindered the reproduction of a wide range of notes, and made tuning very hard. To overcome these obstacles, the musician used flutes of various sizes and, therefore, which were able to play different notes. The later use of keys enabled the increase of the instrument’s extension, the improvement on the intonation and the access to all the chromatic scale. On the 19th century, Theobald Boehm, builder, goldsmith and flute player, has done improvements on the instrument that made his flute to be the most used flute in the world. Boehm redesigned the instrument and created ring shaped keys. Each key surrounded a hole and also operated a second hole, which enabled that a finger to cover two or more holes simultaneously. All these modifications made the sonority of the flute stronger and more uniform. Intonation was also improved and the chromatic notes were made more accessible. After much experimentation, Boehm reached his ultimate model in 1847; this flute, with small changes, keeps on being the standard model. The family of flutes include the Piccolo or ottavino (instrument half the size of the transversal flute, tuned an octave higher), the alto flute (tuned in G); the bass flute (tuned an octave lower from the transverse flute). This item from the Delgado de Carvalho Museum was owned by a student of Joaquim Callado (1848-1880), important Brazilian flute player and composer. However, the instrument ended up being mistakenly recorded as having been owned by Callado himself. The mistake took place due to the inscription on the mouthpiece (see the field “Marks and inscriptions”) that mentions Callado. In reality, the inscription’s sayings were probably a homage made by the student after Callado death.

General Data
Classification
421.121.12 Open side-blown flutes with fingerholes
Item Data
Code
mvim_dc_ae_0053
Date
19th century
Place of Manufacture
France
Manufacturer / Author
Clair Godfroy
Material
cocus wood, silver
Dimensions
L= 66cm W=4cm H=2,8cm D=1,8cm
Marks and Inscriptions
Later inscription on the mouthpiece: metal plate “Callado 20 de March de 1880 da João Duarte's disciple”. Original inscription on the head: “CLAIR Godfroy aine A PARIS [?]”. Back inscription on the head: “[?] GUARANY DIAS DA FONSECA RUA DA QUITANDA RIO DE JANEIRO. ”Original inscription on the central joint:“ CLAIR Godfroy aine A PARIS [?] ”. Original inscription on the foot:“ CLAIR Godfroy aine A PARIS [?] ”.
Origin
Not determined.
Location
MIDC/EM/UFRJ 421.1 I4 Shelf 19 Bibliography:
Bibliography
BASE MINERVA, 2014.
BERKLEY, 2009.
BETHENCOURT; BORDAS; CANO; CARVAJAL; SOUZA; DIAS; LUENGO; PALACIUS; PIQUER, ROCHA, RODRIGUEZ; RUBIALES; RUIZ, 2012.
BRANDÃO, 2013.
Consulting Franklin Correa da Silva Neto (2014).
DOURADO, 2004.
SADIE, 1994.
MIMO, 2014.
Notas
"Clair Godfroy is considered to be one of the main innovators of flute making of the 19th Century. Some of his building procedures remain in use up to the present date, such as: keys with arms, double G sharp key and silver incrusting on the mouthpiece. This item from the Delgado de Carvalho Museum was owned by a student of Joaquim Callado (1848-1880), important Brazilian flute player and composer. However, the instrument ended up being mistakenly recorded as having been owned by Callado himself. The mistake took place due to the inscription on the mouthpiece (see the field “Marks and inscriptions”) that mentions Callado. In reality, the inscription’s sayings were probably a homage made by the student after Callado death. Callado also preconized the use of the five key flute, as opposed to the Boehm system" (Source: Eduardo Monteiro, teacher of the Music School of UFRJ. Information available at the BASE MINERVA, 2014).
The wooden box has the following measures: L = 40cm W = 10 cm.
Cookie Disclaimer