SitarMohamad Busc | MIDC
Audio & Video Records
The instruments featured in these videos / audios are not museum items, but similar ones. The visual resources used in the materials are not for profit. The visual resource is used as a way to illustrate the use of a musical instrument with an educational purpose.
Audio 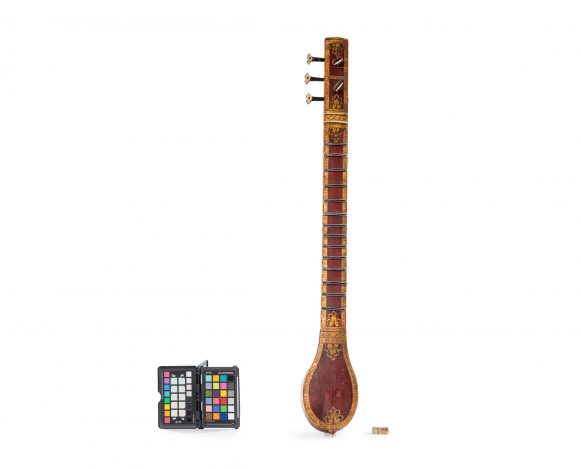 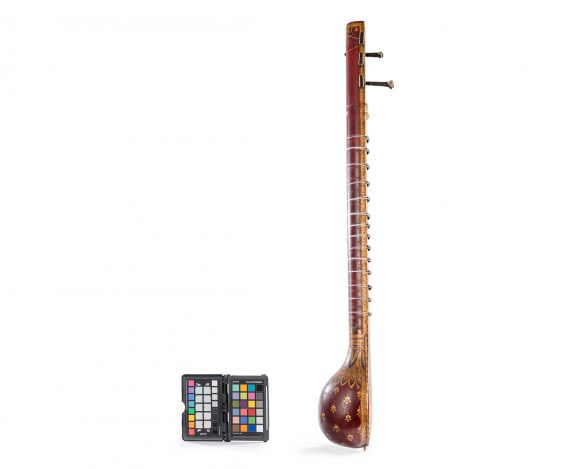 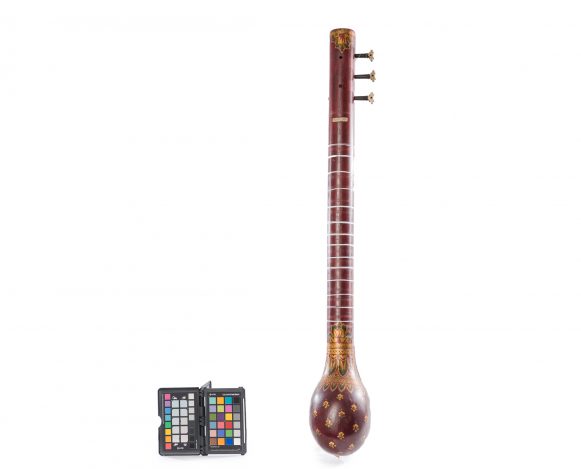 The instrument is made of wood, the resonance box is bulky and the neck is long and hollow, with 16 metal divisions. These are tied to the neck with tripe made strings. The tuning pegs are made of black wood, with ivory edges sculpted in the shape of two cloverleaves. The two nuts and the bridge are also made of ivory. The whole instrument is varnished and has golden ornaments. The instrument has five strings, four made of steel and one made of brass. The strings are tuned in the following way: F3-C3-C3-G3-C2. In order to play, the instrument is placed in a vertical position, on the musician’s shoulder, or horizontally on the floor, and it can be held either by the singer or his assistant. The strings are played with a twisted brass wire plectrum called the mizrab.

The sitar is a common instrument in the south of Asia. It is used by rural itinerant players (in Rajasthan, a state of India), in modern radio and film orchestras, in chamber music, in Muslim and Hindu music, on public concert stages, as well as conveyed by urban medias. Along its history, the sitar has become an instrument imbricated to Indian culture, although its origin refers to Turkish and Persian immigrants – the name sitar comes from the Persian word sihtãr, meaning “of three strings”. These immigrants have brought to India their music and their instruments during the Muslim Delhi Sultanate (1192-1526). Amongst these instruments of Turkish-Persian origin, the tambur, was the ancestor of the sitar. It was a sort of long neck lute, with a wooden oval or pear shaped resonance box, tuning pegs on the right side and/or on the front part, inserted directly on the neck, wooden soundboard, strings made of tripe or fiber, with or without frets. In the 17th century, during the Mongol Empire, the long neck lute started to be called a tanburah, and was spread amongst Hindu musicians.
It was in India, in the 18th century, still during the ruling of the Mongol Empire, that the sitar took its modern shape as a solo instrument in classic Indian music, and the use of the five strings sitar was already frequent. The name sitar established itself in the beginning of this period, although there are records that still mention “tamburas with or without frets”, up until about 1800. The changes include the increase in the length, the decrease in the width of the neck – which became straight and no longer sharp like before – the use of the bulky shape for the resonance box, no longer a flat back, the adoption of a heavy metal for the frets, as well as for the nut, more rigid string guides, made of bone, and the use of strings made of heavier metals. At present, there are many types of sitars, however the most common type in concert music in India is the concert sitar, with seven strings, more or less twelve sympathetic strings, with twenty mobile frets that allow for various modal tunings. The Museum’s specimen has features that indicate that it is a sitar with some tambura characteristics – only five strings (no sympathetic strings), tuning pegs with edges sculpted in the shape of two cloverleaves (the modern sitars have thick round tuning pegs, with a bulky upper part sculpted without ornaments or in a spiral shape, roses, etc., for a better adherence) – but also with sitar features, that is, steel strings played with a mizrab.