PsalteryAntônio Muniz Santiago | MIDC
Audio & Video Records
The instruments featured in these videos / audios are not museum items, but similar ones. The visual resources used in the materials are not for profit. The visual resource is used as a way to illustrate the use of a musical instrument with an educational purpose.
Audio 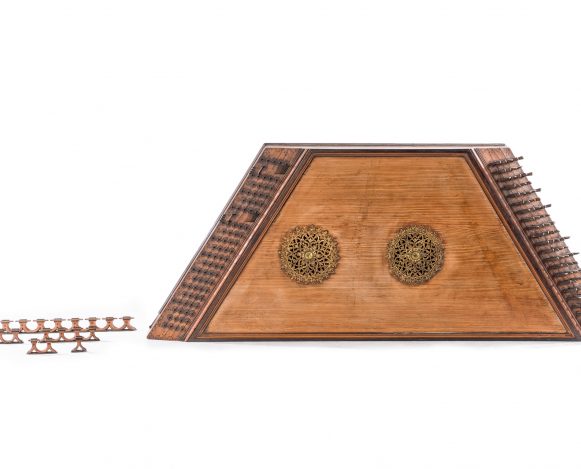 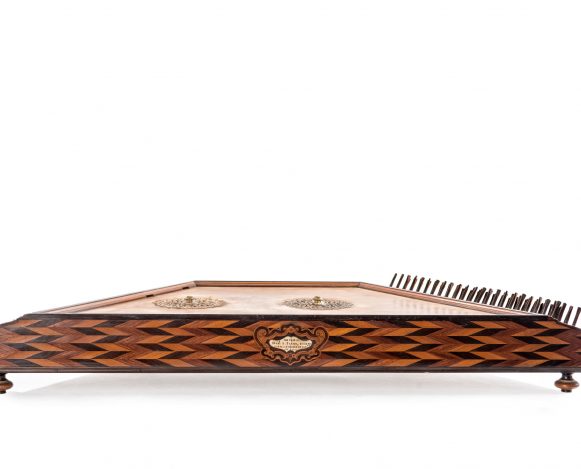 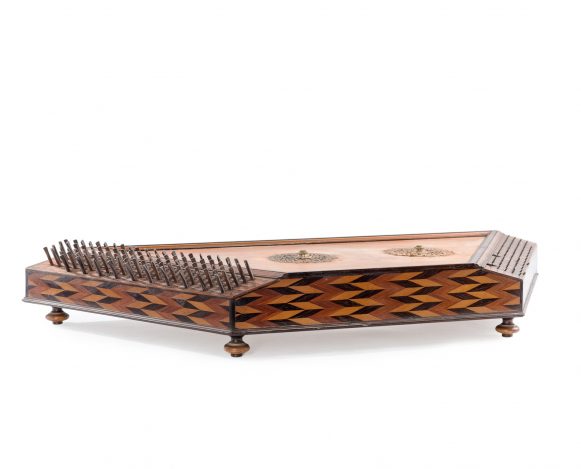 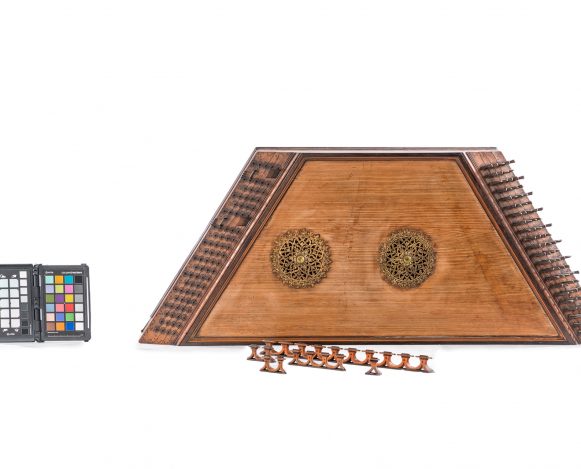 Wood trapezoid shaped instrument without neck. It has two sound openings on the resonance box, and the strings are set in parallel along the soundboard. It has ninety-eight metal tuning pegs and wood bridges. At the bottom of the instrument there are four feet. Each opening on the resonance box is adorned with floral motifs and a green stone, the tuning pegs also have floral ornaments on the edges. The tuning pegs hold sets of three or four strings, the instrument has a three octave extension, the lower key being D2, and the sharpest F#5. In order to play, the musician places the psaltery on a table or over his legs, and strums the strings with his fingers or a plectrum. Another possible technique is to hit the strings with sticks.

The psaltery is an instrument of the sitar family. The term sitar is used to name any chordophone having strained strings over its body. Normally, the body is the resonance box itself and the strings are strained on top of it, passing above the bridges. In the psaltery, specifically, the strings are held by metal or wood tuning pegs. In ancient times, the instrument was used by Assyrians, Babylonians and Egyptians, in religious and profane rituals. The Hebrews used it to accompany psalms in sacred chants. Around the 17th century, the Eastern psaltery (qanun) arrived in Europe through Spain and influenced the structure of the psaltery commonly used in the European continent between the 12th and the 15th centuries. At that time, the psaltery was used both in religious and profane rites, like dances and minstrels’ songs. During the Renaissance, due to the dissipation of chromatism, a system to which the psaltery could not respond, the instrument lost space. In the 16th century, the psaltery led to the creation of other instruments: the dulcimer (where the strings are played by hammers), the harpsichord (where the strings are pinched, and a keyboard was added to its structure), and the sitar (where frets were added). In the 18th century, the instrument was enjoyed again, and many of the specimens that have remained to this day are from this period, like the Museum’s specimen. In the 20th century, the psaltery was mainly used in ancient music repertoire. The presence of this instrument in Brazil is rarely cited, except by Cunha Mattos who reports that in 1824, in the province of Goiás, some ladies sang and played the psaltery, sitar, guitars and violas.